The Best Eclipse Will Always Be The Eclipse From ‘Marge Vs. The Monorail’ 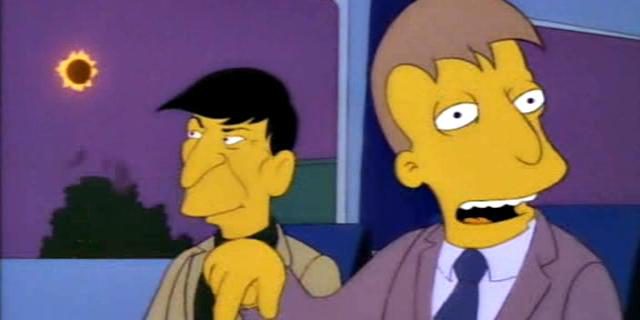 Written by Conan O’Brien, “Marge vs. the Monorail” is one of the most-iconic Simpsons episodes of all time. Considering that the show has been on for almost 30 seasons at this point, that’s really saying something. It’s a sillier episode, but it’s a hilarious one, with many memorable lines. Plus, who can forget Phil Hartman’s turn as the film-flamming monorail salesman Lyle Lanley? This episode gave is the “Monorail” song! What more can you want?

Well, how about a cameo from Leonard Nimoy and a solar eclipse? The cheaply-constructed monorail that Springfield built, and which is being conducted by Homer, runs on solar power. As such, they can’t simply shut the monorail down when it starts to run amok. Then, a solar eclipse happens, and the monorail is finally stopped. Nimoy, Spock himself, notes the eclipse, and saying, “the cosmic ballet goes on.”

Then, of course, the eclipse stops, and the monorail takes off once again. Only Homer’s ingenuity, and the power of donuts, manage to save the day. Sure, many of us may be about to experience the first real solar eclipse of our lives, but it will never hold a candle to the eclipse over Springfield all those years ago. The cosmic ballet goes on indeed.