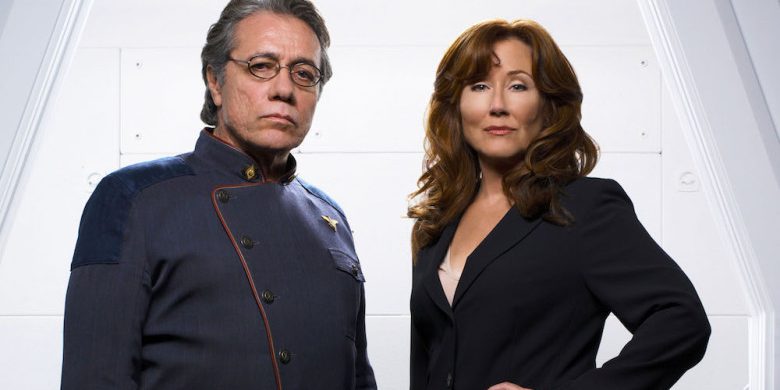 Major network Syfy has made two major mistakes in its 25-year history. The first was changing its name from the more logical “Sci-Fi Channel” to the questionably pronounced “Syfy” for arbitrary branding purposes. The second was the ending of hit show Battlestar Galactica in 2009 with a Deus Ex Machina resolution that didn’t quite resolve all of the series’ storylines. But for the network’s 25th anniversary, they’re determined to pay homage to their fans proper, with a litany of events at this year’s San Diego Comic-Con, most notably a reunion of the show’s creator and cast.

Debuting as a miniseries event that eventually spawned a series lasting 4 seasons, Battlestar Galactica was a reimagining of the 1978 series of the same name, taking place in a post-apocalyptic future, following the last surviving humans from the Twelve Colonies of Kobol, after their nuclear annihilation by the show’s antagonistic species, the Cylons, in search of the fabled colony known as “Earth.” The series made Time‘s “100 Best TV Shows of All-TIME,” in addition to a Peabody Award, Television Critics Association’s Program of the Year Award, Emmy nominations for writing, directing, costumes, and others, and Emmy wins for visual effects and sound editing.

Syfy’s executive VP of marketing Alexandra Shapiro has stated that “San Diego Comic-Con is the pinnacle event of the year for sci-fi enthusiasts, and as the only network dedicated to the genre 24/7, we can’t wait to celebrate in a big way. Syfy is going to San Diego this year with a singular focus: to put fans first.” BG alumni confirmed to be attending the reunion include series creator Ronald Moore, along with Katee Sackhoff, Tricia Helfer, Mary McDonnell, and Grace Park confirmed, although more are rumored. If you’re lucky enough to have snatched up a badge for the con this year, the reunion will take place on July 20th in Ballroom 20.