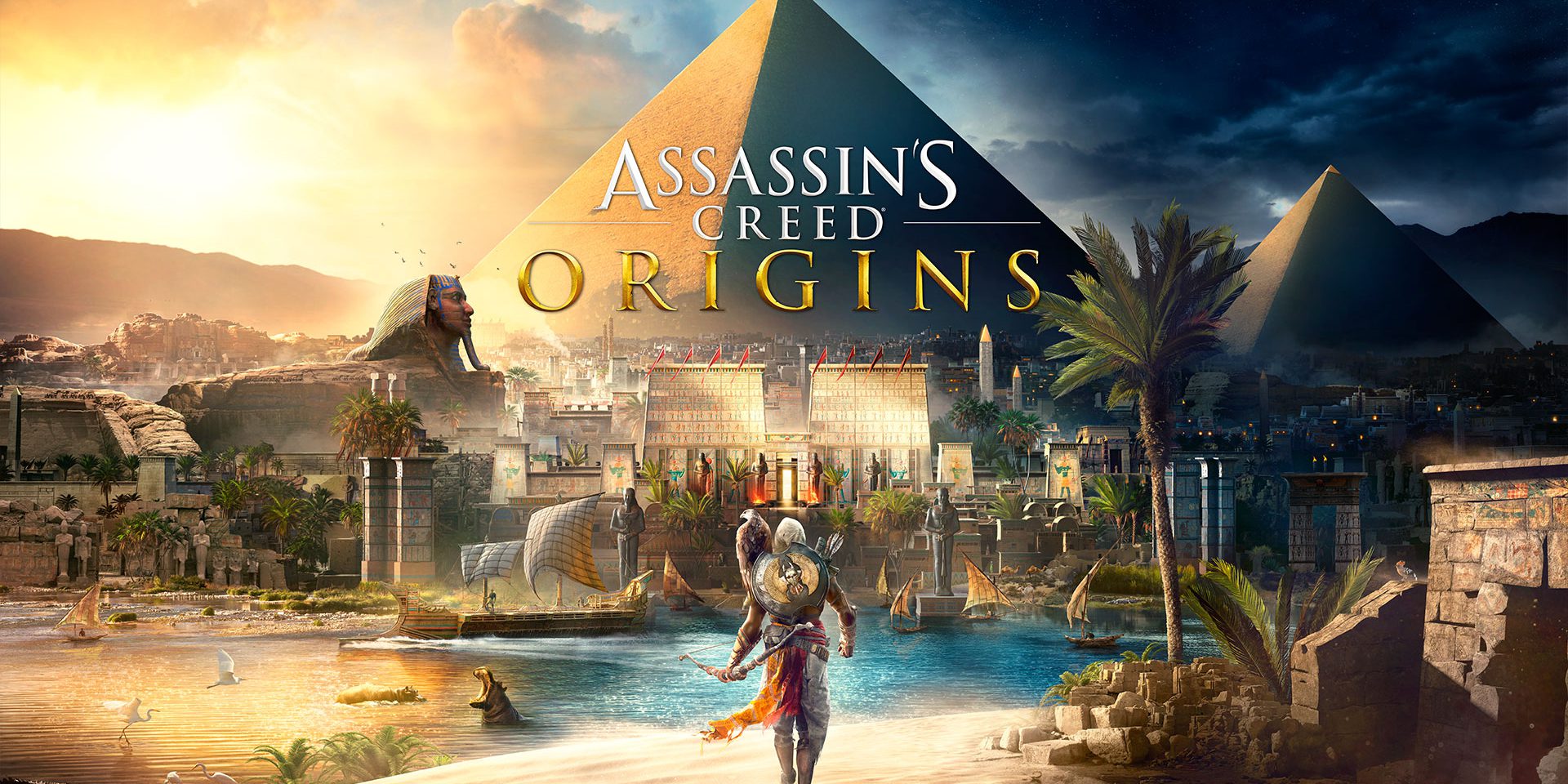 To celebrate the launch of Assassin’s Creed Origins, Techie+Gamers spoke with Julien Laferrièra, the game’s producer at Ubisoft Montreal, about dreams of exploring Ancient Egypt.

He also spoke about the challenges the team ran into during game development, what made the company want to change the game to an Action Roleplaying Game (ARPG), and his favorite character in Assassin’s Creed Origins.

TG: Congrats on the upcoming release of Assassin’s Creed Origins. How does it feel to have completed the game?

Thank you! It’s been a team effort over four years, and we’re really happy to finally have people play our game. We were pretty ambitious for this opus as we wanted to modernize the Assassin’s Creed experience and revisit our core gameplay pillars. This was no small task as we rewrote the fight system from the ground up, upgraded the navigation so players can traverse easily the massive world we built, and we introduced a lot of RPG elements so players can customize their Bayek according to their play-style. I feel today all those investments are paying off as we have an Assassin’s Creed game that feels fresh!

TG: What were some of the challenges you ran into during game development?

In order to properly render this incredible setting and do it justice, we needed to develop new tools and technologies and create an exotic and lively playground that players will spend hours exploring. Ancient Egypt is not only massive, it’s more diverse than any other setting we created in the past. Wildlife plays a major role in that diversity as do the inhabitants of the world and we wanted those elements to be systemic and believable. To make that possible we created a brand new artificial intelligence framework from the ground up. Thanks to that new approach, most NPCS now have their own agenda and full day cycles that players can leverage to decide when and how they should act.

TG: What has your personal experience been like when developing Assassin’s Creed games?

I’ve been on the franchise for a few years now, Origins being my fourth Assassin’s Creed game. I must say the team is pretty incredible, I’m lucky enough to work with amazing people around the world. We also have a great community of fans that have been following the franchise for many years, and we wouldn’t be where we are today without them.

TG: The game went from Action/Adventure to an ARPG. What made you want to make Assassin’s Creed Origins different?

From the very start of the project we had one major goal on the gameplay side of things: give more freedom to players by putting them in total control of how they play and enjoy the game. We know that there are different profiles of Assassin’s Creed players, some are more into the story, some are more into exploration, and others are focusing on stealth, on combat… We wanted to create a game that welcomes all those different types of players and let them experience it the way they want. The evolution to a more ARPG game was the result of that vision: in Assassin’s Creed Origins players can choose what kind of Assassin they want to be by focusing on one or several branches of our Ability tree. They can find their preferred weapon amongst the dozens they will loot in the game, with different rarity levels of attributes. They can decide to be stealthy, or in the opposite be all about full-on fight – the game gives them all the freedom they are looking for.

TG: Can you tell us how you came up with and designed an Egyptian landscape?

It’s been our dream to explore Ancient Egypt for a while now. This is the birthplace of modern civilization and it was home to a society and culture that still triggers fantasies and mysticism today. We also knew that Ancient Egypt was one of the most desired settings requested by players and franchise fans and we are so happy we’re able to bring that to life through Assassin’s Creed Origins.

We chose this particular time period because it offers the most amount of mystery and discovery that we can get from Ancient Egypt. In this land of Gods, pyramids, and mummies, Ancient Egypt triggers fantasies and mystery that we aim to deliver on in the most epic way possible. What is underneath the great Pyramids? Who are these men with animal heads? Who were the Gods and what did they do? How does this all lead to the birth of the Brotherhood? This is what our players will discover.

TG: What was some of the advice you got from meeting up with Egyptologists while creating the real world location?

One of the other big differences from previous Assassin’s Creed games is that we go much further back in time than in previous installments. So we had to work very closely with historians and Egyptian experts to help us fill in the gaps of Egyptian life not easily found in history books. For some elements, this lack of reference also challenged us to create and illustrate parts of Ancient Egypt rather than re-create known history as we did with past games. For this we heavily relied on the amazing work done by our art team to really capture the look and overall feel of what Ancient Egypt would have been like at the time.

We spent a lot of time learning about the Great Pyramids, being so iconic to Ancient Egypt. We have inspired ourselves from the great work achieved by many recent scholars; such as Mark Lehner and the Giza Plateau Mapping Project. We have also got inspired by the great digital reconstitution project Khufu Reborn achieved by Dassault Systems. We do believe that Jean-Pierre Houdin’s theories are probably the most accurate ones, meaning there is probably a secret section in the Great Pyramid yet to be discovered. That secret section can be discovered in the game.

TG: Several characters appear in Assassin’s Creed Origins. What’s your favorite character in the game and why?

I really like what we did with the different characters of the Order of the Ancients. First, everyone loves a good bad guy, but I love how each one is different and interesting. They want to take control over Egypt and for that they manipulate their puppet Ptolemy XIII, the boy king, brother, and rival of Cleopatra. Their deep motivations and ultimate goals are unclear and known only to their members, but it seems that they are linked to a mysterious vault they discovered in Siwa, a vault that could hide the power to control mankind. The mystery around them just does it for me.

TG: Can you go over the different abilities within each of the game’s three classes: Hunter, Warrior, and Seer?

This is one of my favorite aspects of the game: the ability to customize your assassin fitting your play-style. For players who favor stealth and long-range combat with the bow, abilities of the Hunter tree will please them. Each bow has a unique ability that you can unlock. There’s also an ability that will slow down time when you jump while aiming, giving you a bigger window to land that perfect headshot.

The Warrior path is great for people who are into melee combat. Abilities will improve your Overpower attacks, either filling your Adrenaline gauge faster, or making your combos more powerful.

And then we have the Seer, with abilities that revolve mostly around cool tools like bombs and poison. There’s also an ability to tame animals that is pretty neat. Pretty fun to have your own pet lion on your side!

TG: Biggest surprise this game has to offer?

Without giving any spoilers, I can say the story contains many surprises and twists! The game is also filled with interesting locations, many of these are unexpected and reveal more background to the Assassin’s Creed lore.

With this opus, we are telling the story of the foundation of the Brotherhood. Fans will appreciate this key moment of our lore, but the origin story is also a great entry point for newcomers to the series.

That being said, gameplay has been revamped quite a bit, so that will impact how you play the game. Combat feels really different the moment you get your hands on the controller, and the better you get at it, the more satisfying it becomes. The ARPG elements and the focus on freedom and exploration means you can pretty much decide your own path in Assassin’s Creed Origins. Don’t hesitate to wander off the beaten path and try many things. If you feel like spending hours exploring the world and discover new opportunities outside of the main story, please do so! There are a lot of hidden surprises.

Assassin’s Creed Origins is now available on PlayStation 4, Xbox One, and PC.