‘Animaniacs’ First Episode: How Does It Hold Up? 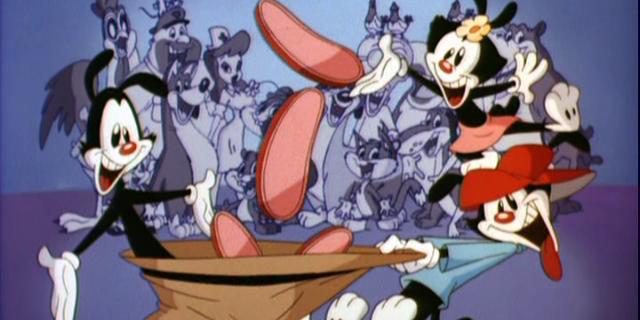 Thanks to last week’s deal between streaming entertainment giant Hulu, Amblin Entertainment, and Warner Bros. Animation, Animaniacs will be revived in 2020 for another two zany seasons. The even better news is that all of the original animated run of Animaniacs (five seasons, 1993-1998) is now available to watch on Hulu. Like RIGHT now. Today.

So how has Animaniacs aged after 25 years? Having watched the show when it first came out, I decided to spin-up the wayback machine (my TV) to revisit the first episode of Animaniacs, which originally aired September 12 of 1993. Below are my thoughts as I watched them.

00:00 — The episode starts off with a “Newsreel of the Stars” short that sets up the premise: The Warner brothers, Yakko and Wakko, and the Warner sister, Dot, were cartoon stars created in 1930 at Warner Bros. Studio, but when the (now sentient) creations turned out to be totally out of control, they were locked away in the Warner Bros. water tower until they escaped in 1993. Overall, this plays as well today as it did back then, even though the overall conceit of the show gets underplayed by the second episode. But seriously, Warner Bros. imprisoned three of its employees for over 60 years without due process?

Okay, it’s a cartoon, but still…locking up the mentally ill is just a little problematic today. And yes, I’m overthinking it.

01:03 — Yes! The Animaniacs theme song is just as catchy and singable as ever. It also reiterates the very loose premise of the series. The theme introduces Animaniacs’ ensemble of characters as well, such as Pinky and the Brain and Slappy the Squirrel, though we don’t officially meet them in this first episode.

1:37: “While Bill Clinton plays the sax…” Oh yeah, Bill Clinton was president in 1993. And he played the saxophone on The Arsenio Hall Show as a candidate, helping him get the youth vote. While Clinton’s inclusion is more of a nostalgic relic now, and certainly isn’t helped by renewed calls to look into allegations of his past sexual misconduct, it’s a reminder of how Animaniacs wasn’t afraid to get political — at least in a gentle, prodding way. I’m guessing that our current president will make an appearance or two in the revival. Helloooooo, Pence!

02:13 — The first short is “De-Zanitized,” which focuses on Dr. Otto Scratchansniff, the Warner Studio’s psychoanalyst to the stars, who is now overwhelmed by Yakko, Wakko, and Dot. This segment gets to the heart of the show’s mythology: Scratchansniff is charged with the Warners’ welfare, but is being driven daffy by them. At least it points out that he started at the studio 50 years ago, meaning that he wasn’t responsible for locking up the Warners in the first place. (Why is this bothering me so much???)

03:00 — Porky the Pig cameo! He’s the link between the classic Warner Bros. heyday of Bugs Bunny and Daffy Duck to this upstart cast of new characters. It reminds me of when Dr. McCoy from the original Star Trek showed up at the end of the premiere episode of Star Trek: The Next Generation to pass on the torch.

03:14 — Actor Ronald Reagan shows up in a flashback to tell Dr. Scratchansniff about his dream of one day becoming President of the United States, leading the doctor to write that he has “delusions of grandeur” and is “incurable.” Reagan was well out of his presidency by then, so I’m not even sure if this was that funny in 1993. Younger viewers may not even realize that Reagan used to be a movie star.

03:42 — Clint Eastwood joke in which it’s implied that the actor/director had beaten up Dr. Scratchansniff. In 1993, Eastwood still had a tough-guy image, helped along by his starring role as Harry Callahan in the Dirty Harry film franchise. Today, he’s seen more as a cranky old man who talks to empty chairs.

04:11 — The Warner brothers and sister introduce themselves to Dr. Scratchansniff for the first time. This is history, folks!

05:00 — Hello Nurse is introduced, resulting in the first “Hellooooo, Nurse!” from Yakko and Wakko. As their tongues hang out of their mouths, and they literally transform into wolves, it’s somewhat of a relief that Dot seems repulsed by their sexist behavior. Of course, this is a throwback to the classic Warner Bros. cartoons, in which male cartoon characters simply lost it around an attractive woman. At least we find out eventually that Hello Nurse is a genius and not just a one-note gag. I’m curious to see how the revival will handle this character in the era of #MeToo and Time’s Up.

06:21 — “I haven’t been this upset since we made Don’t Tell Mom the Babysitter’s Dead,” says the head of Warner Bros. Studios to Dr. Scratchensniff. This is a joke that hasn’t aged well, unless you have strong feelings about the 1991 Christina Applegate-starring movie.

10:50 — This is the first time we get to hear Wakko talk for an extended period of time, and I totally forgot that his voice is inspired by Ringo Starr of The Beatles. There’s nothing particularly funny about this observation, though it does make me wonder how just one of the Warner siblings has a British accent.

11:19 — Watching Yakko unnerve Dr. Scratchensniff by messing up his word association game is pure comedic joy. The Brain may be the Animaniacs character with the highest IQ (or maybe it’s Hello Nurse), but Yakko always proves himself to be the most brilliant, effortlessly outthinking authority figures around him. And yet, unlike Bugs Bunny, he doesn’t seem to have a mean bone in his body, even when he’s tormenting people.

13:30 — The short ends, as it’s revealed that the psychoanalyst to whom Dr. Scratchensniff has been confessing are actually the Warner siblings. (Shock! Surprise!) Overall, this short is a very solid opening to the series, setting up the main characters and the show’s irreverent humor.

13:31 — The second short is “The Monkey Song,” a self-contained musical number sung by Dr. Scratchensniff and the Warners that gives a peek at the rest of the characters in the show. It’s a carryover from the first short, in which the doctor compares the Warner siblings to monkeys.

13:51 — “Hey, watch where you point that sissy flute!” shouts one of the Goodfeathers. That line definitely sticks out now, and not in a good way.

15:18 — “Those monkeys had the nurse in a mad embrace,” sings Dr. Scratchensniff as Wakko and Yakko are curled up in Hello Nurse’s arms, kissing her cheeks, as she looks distressed. In light of the wave of sexual harassment allegations in the workplace, this sequence is especially cringeworthy. Cartoon characters may not have required consent in 1993, but they do now.

15:25 — Turnabout is fair play, I suppose. Dot jumps into the Doctor’s arms and embraces him, singing “I didn’t know your eyes were blue.” It’s a little confusing since Dot daydreamed about a romantic interlude with the doctor in the previous short, only to be disgusted by it. Again, I probably shouldn’t overthink it.

17:46 — End of the second short. This musical number went too heavy on the Goodfeathers for my taste, but did a good job at giving viewers a glimpse of the extended Animaniacs universe.

17:50 — The last short, “Nighty-Night Toon,” begins. It’s a bedtime story featuring the Warners and supporting characters as we say goodnight to them. Woah, is that Sterling Holloway, the voice of Winnie the Pooh, as the narrator? No, but it’s Jim Cummings, who took over Pooh’s voice after Holloway retired from the role. Cummings will also be performing Pooh’s voice in the upcoming live-action movie, Christopher Robin.

18:24 — Here’s the first speaking appearance of The Brain, who explains that he’s a mouse, not a rat. The Brain, voiced by Maurice LaMarche, was inspired by famed film actor and auteur, Orson Welles, though by 1993 — eight years after his death — he had become better known for pushing wine in commercials. Still, it’s a funny voice and brilliant character, regardless of their origins.

18:26 — Two more characters I forgot about: Flavio and Marita Hippo, a pair of married hippos. They get described as being “incredibly fat” here. (Nice body shaming, unseen narrator!) When Marita asks if they’re really fat, Flavio responds, “No, we are simply bigger than life itself.” Helloooo, body positivity!

18:51 — Wow, this Joe Pesci impression in the Goodfeathers trio has already grown old and we’re only in the first episode. Maybe this seemed fresher in 1993. I’m glad they didn’t become breakout characters like Pinky and the Brain; they were almost completely dropped from the series after the second season.

19:05 — Mindy and Buttons get another appearance, along with a character I really don’t remember AT ALL, Mr. Skullhead — probably because this was his only appearance in Animaniacs.

19:10 — Slappy the Squirrel finally gets a line here. A crotchety old cartoon diva from the golden age of Warner Bros., she was one of my favorite characters in Animaniacs. With most of old Hollywood royalty now deceased, the character probably isn’t that relevant nowadays, though I hope we see her in the revival.

19:50 — Pinky speaks for the first time. The Brain’s idiot partner is voiced by Rob Paulsen, who also voices Yakko.

Overall, the first episode of Animaniacs holds up very well, if you’re able to forgive a few moments of outdated references and cartoonish sexism. If you’ve gotten this far, though, I implore you to keep watching into the second episode for the epic musical short, “Yakko’s World,” one of the series’ finest moments, in which Yakko (Paulsen) quickly blows through the names of all the countries in the world in song. And in case you think Paulsen cheated somehow to get through this song with such precision, here’s a video from Nerdist of him singing an updated version of it last year.