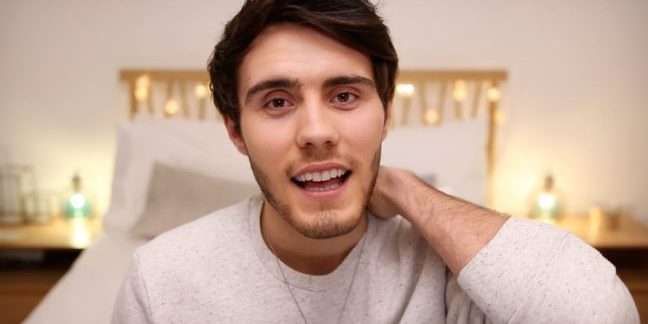 Alfie Deyes is a British YouTuber and vlogger who has gained a huge following particularly in the UK. He has built this fan base on the idea that it is okay to be “pointless” and that you should focus on having fun. Other than being a YouTube star with three popular channels, he also released a series of books called the Pointless Book Series and is also a successful property investor. Alfie is apparently particularly conservative with his spending and is estimated that he has built up a net worth of about $5million.

Alfie began his rise to YouTube stardom in 2009 where he created his PointlessBlog channel. In May of 2016 it reached 5.5 million subscribers and 481 million total views. His vlogging channel PointlessBlogVlogs has amassed around 4.1 million subscribers, with a total of 884 million views. Alfie’s final and third YouTube channel is his gaming one, PointlessBlogGames, that has acquired 1.8 million subscribers and around 210 million total views. Therefore, revenue from YouTube advertising is a major contribution to his total net worth. Deyes is also very popular on other forms of social media. He has 3.2 million followers on Twitter and around 4 million on Instagram. Yahoo! News inserted him as one of “12 Web-savvy entrepreneurs to watch” in December 2013. In January 2014, Alfie starred on the cover of Company magazine, which is a popular lifestyle magazine in the United Kingdom.

Another major contribution to Alfie’s net worth are his book sales and deals with Blink Publishing. 2014, his first book The Pointless Book was released. It was part journal and part activity book. The activities are basically pointless. Hence, it gathered much criticism from the mainstream media. The Guardian’s Rhik Samadder in his review of the book wrote “It’s a bit like the activity sheets given to children in museums and on planes to keep them quiet. Most of the pages are largely blank, containing instructions to “Draw a selfie” or “Fill this page in with whatever you want… the Pointless Book is a canny piece of merchandising.” Alfie’s second book The Pointless Book 2 was released in March 2015. It featured very similar content to the first one. It became the second bestselling non-fiction book on the first week of its release in Britain.

When Alfie was questioned by Business Insider on what would like to do with his great wealth. He responded by saying he does not spend money recklessly and is more likely to buy a new set of sneakers than a heap of luxury goods such as sports cars or yachts. Alfie is conservative with his money, spending on a nice place to live and better equipment for his YouTube channels. In recent times and probably more in the future, Deyes is looking to get into merchandising. This includes clothing, accessories and smartphone cases.

Alfie lives with his girlfriend Zoe. They recently sold their 1.3million British Pound mansion for a luxury pad in Brighton.