Hodor Is Shilling For KFC Now 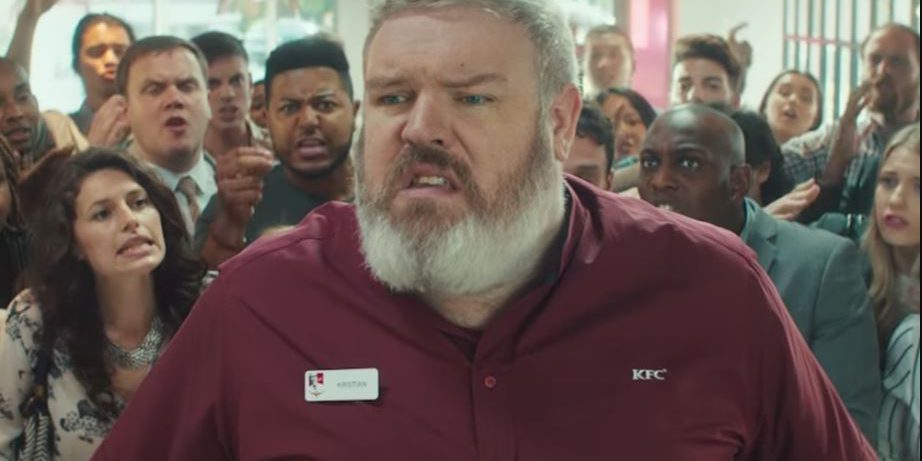 In the United States, our KFC commercials are built around different actors playing Colonel Sanders in comedic, often meta, ways. Right now, we’ve got George Hamilton playing an “extra crispy” Colonel, and then Rob Lowe plays him as well. It’s all very silly, and frankly it doesn’t have much to do with fried chicken. Over in the United Kingdom, though, apparently the Colonel doesn’t have the same cache. Instead, they’ve got Hodor hocking their KFC.

Hodor is, for those who don’t know, a character from Game of Thrones played by actor Kristian Nairn. He was much beloved by fans of the hit HBO show, which makes him a good choice as a pitchman. In a popular ad currently airing in the UK and Ireland, Nairn basically plays Hodor at a KFC. He says “Chicken and fries” repeatedly until it sounds like he’s saying “Chicken and rice.” The tagline for the ad is “Same great chicken. Just with rice instead of fries.”

If you don’t watch Game of Thrones, that won’t mean anything to you, but it’s a fairly clever reference to the show. However, while people are losing their minds over Hodor appearing in a KFC ad, that’s not really the most notable thing here. Apparently they serve rice at KFC’s in the United Kingdom and Ireland? That’s crazier than anything that ever happened in Game of Thrones.