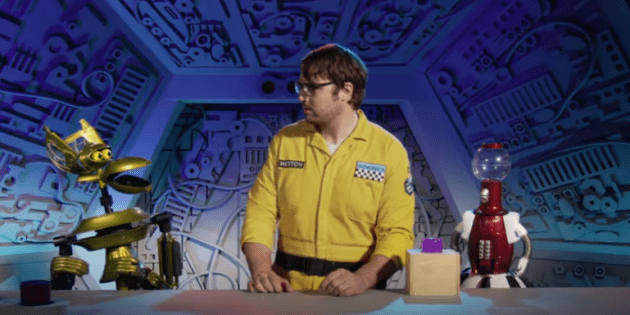 As a man who once wrote an entire book about the TV show Mystery Science Theater 3000, I was, needless to say, quite excited to hear the show was coming back. In its original run, which stretched across two networks, it was one of the best shows of all time. Just having it back was cause for celebration, but success was not guaranteed. Fortunately, the return of MST3K was mostly a delight, and hopefully Netflix will bring up more seasons in the future. However, for now, having watched the entire 11th season here is my ranking of every episode.

Right off the bat, I imagine this is going to surprise people. The general consensus seems to be that “Cry Wilderness” was one of the better episodes of the season. I thought it was fine, but it didn’t capture my fancy in the same way. The movie, which is about a boy and his friendship with Bigfoot, is awful, but in a way that is half-fun and half-unpleasant. Paul, the aforementioned boy, is quite grating. I also felt the riffing was a little weak. This was an issue for the first couple of episodes, which brings me to…

The very first episode of the new season. I wonder if, were this episode not glimmering with the sheen of a brand new season of a show I love, I might have it at the bottom of these rankings. It’s hard to excise the giddiness I felt the first time I saw the doors to the theater opening once more from the equation. It’s forgivable that they had kinks to work out, especially while introducing a new host in Jonah, new voices for Crow and Servo, and new Mads. I liked “Reptilicus,” but were it not the first new MST3K in over a decade I imagine it wouldn’t have felt special or even notable.

12. The Loves of Hercules

I was never a huge fan of the Hercules movies from the original run of the show. However, The Loves of Hercules which starred Jayne Mansfield and her husband Mickey Hargitay (yes, the father of Mariska), is worse than any of those other Hercules. Fortunately, it’s in a good way. By the time I had watched this episode, it was the middle of the season. I no longer feared that MST3K wasn’t going to be what it used to be, but I also was not basking in the glow of the show having just returned. As such, I could just watch, and enjoy, the episode as good but not great. I got a few good laughs, but if you asked me to really dig deep into this episode I couldn’t do a great job of it, because it wasn’t particularly memorable.

The season finale, but hopefully not the series finale. The episode culminated in the payoff of the story arc (yes, an actual story arc on MST3K) about Kinga marrying Jonah. While it was nice to see Pearl, Bobo, and Brain Guy (even if Bobo’s new mask looks weird) again, I wasn’t really all that interested in how it was going to play out. Nobody watches MST3K for storylines, you know? Plus, in truth, I never quite completely came around to Kinga and Max. I like Felicia Day and Patton Oswalt a lot, but the characters never clicked. Anyway, this movie is goofy fun, but it’s not even the best Caroline Munro movie of the season.

10. The Beast of Hollow Mountain

I wish the movie had gotten to the beast earlier. Granted, that’s part of what makes it a bad movie worthy of being riffed by Jonah and the ‘bots, but it also hinders the viewing experience a bit. When the cheap-looking monster shows up, the charms of the film start to bloom. Before that, it’s all a boring white guy in Mexico and a stereotypical drunk Mexican dude. This episode does have a couple good host segments, at least, including Tom and Crow dressing like the creatures from the festival in the movie.

9. Wizards of the Lost Kingdom

They showed two Wizard of the Lost Kingdom movies back to back, but this was the less impressive of the two. Part of the problem is the riffing. The bad guy seems likely he is wearing a crab on his head, and so Jonah and the ‘bots imagine this hat is the villain’s wisecracking sidekick Crabby. I didn’t really like this bit, and they went to it over and over…and over and over. It got repetitive, and that dragged the episode down. That being said, the movie has some delightful dumb stuff in it, and there are other riffs that work better.

8. The Christmas That Almost Wasn’t

Even though this episode points out that, being on Netflix, people can watch this episode whenever, I appreciate them throwing a Christmas episode into the mix. “Santa Claus” and “Santa Claus Conquers the Martians” are both classic episodes, and neither of them feature the insane premise of Santa and his lawyer trying to outfox Santa’s landlord. This movie is abysmal, but not in quite as fun of a way as those other two Christmas movies. It’s insane, but at times a bit annoying. However, anything Christmas-y gives the show a lot to work with, riff wise, so I still found the episode to be good.

7. Wizards of the Lost Kingdom II

This movie is a pseudo-comedy, which is tricky. MST3K rarely does comedies, because it’s more difficult to riff on a film that is trying to be funny. I think they managed to do a good job with it, though, even if they didn’t make as many jokes about David Carradine (who is in the movie) as I would have assumed. Even though it’s a bad comedy, it’s still pretty entertaining in its badness, and these medieval, sword-and-sandal type of movies tend to have wonderfully cheap special effects and props. That goes a long way.

This movie is insane. This movie is baffling. It’s one of the 10 worst, or at least one of the 10 most-incompetent, films ever to appear on Mystery Science Theater 3000. Hell, it’s one of the very worst movies ever to be made. To borrow (and perhaps paraphrase) a riff from Manos, the Hands of Fate, every scene in this movie looks like somebody’s last known photo. It’s about a magician and his talking chimp at a carnival. Truly, it has to be seen to be believed, because describing the movie can’t do it justice. Part of the quality of this episode is just being fascinated by this garbage fire of a film, but it also clearly sparked something in the gang riffing the movie, and it also led to a great host segment.

There’s quite a few names attached to this one. It’s a Roger Corman-produced film starring Rock Hudson, Mia Farrow, and Robert Forster. It falls under the umbrella of “cheesy but competent,” which applies to most of the films in this season. There are only a few outright disasters, which means we get several movies that are quasi-watchable, if not good, and Avalanche is one of those. Until the actual avalanche happens, the movie isn’t terribly funny in and of itself. Fortunately, the episode has a lot of great riffs, making it a really good outing for the show. That being said, that extensive Neil Patrick Harris song was a real snooze.

Youngary is no Gamera, but this is still a really good episode. The riffs in this one are particularly great, and not just the “Capsule” run. For the first, say, two-thirds of “Youngary” I would have bet on this one finishing atop the rankings. It peters out a bit toward the end, although the Korean kaiju film being featured culminates with a monster bleeding out in the water, but it’s still a tremendously fun episode. That’s only partially because of the scene where Youngary “dances” either. Capsule!

3. The Land That Time Forgot

Hi, I’m Doug McClure. You may recall him from such films as The Land That Time Forgot. McClure, and his spectacular hair, star in this goofy adaptation of a Edgar Rice Burroughs novel. For some reason the German army also get involved, and it’s all pretty nuts. The movie is a fun bad watch, though, and the crazy world of the Land That Time Forgot provides great fodder for a wonderful episode.

After watching the first two episodes of the new season, I was feeling mildly, but just mildly, concerned. I figured eventually Mystery Science Theater 3000 would round into form, though. Needless to say, there was a big jump from “Cry Wilderness” to “Time Travelers.” The movie is another “competent but cheesy” outing, but the riffing, and the host segments, were much stronger. “Time Travelers” is great, and it’s largely on the strength of the cast, as opposed to the movie.

This episode, though, is great because of the riffing and the film. Starcrash is amazing. It should go down as an iconic good-bad movie, right up there with Space Mutiny. The aforementioned Caroline Munro stars, alongside a young David Hasselhoff. It’s so funny on its own. I’d love to just sit back, watch Starcrash, and laugh. However, when you throw on top of this charmingly, spectacularly bad movie song strong riffs, you get an all-time great MST3K episode, and the best episode of season 11. As long as the show is still capable of doing episodes like this, may it run for another decade.