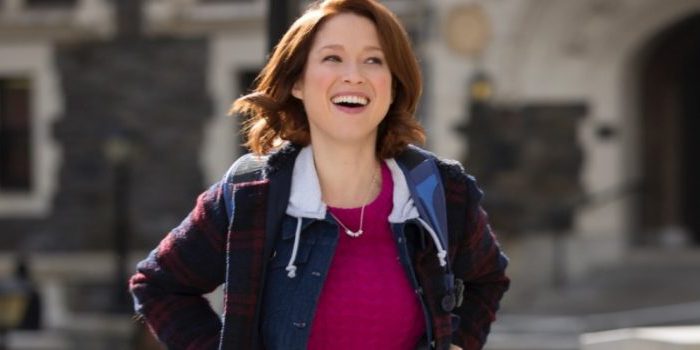 Recently, the third season of Netflix’s wonderful comedy Unbreakable Kimmy Schmidt was released. It’s always tricky to talk about Netflix shows on the internet, because they drop every episode at once. Trying to avoid spoiling things for people can be difficult, so I will say off the bat I don’t intend to delve into plot points for the third season. I will tell you it’s really good, although perhaps the least good of the shows three seasons, and that it’s the same show it has always been. The jokes are abundant and often immensely silly. Tina Fey remains a comedic genius, but part of the strength of Unbreakable Kimmy Schmidt is the cast that Fey and company have to work with. That includes the woman who plays the titular Kimmy Schmidt. I am primarily here to heap praise on Ellie Kemper, who has been giving my favorite performance in all of television (and/or internet streaming what have you), since day one on this show.

After the first season, I said Kemper should win the Emmy for Outstanding Actress in a Comedy Series. I repeated that after the second season. Guess what I have to say after the third season? I love Julia Louis-Dreyfus on Veep. I will not argue her wins haven’t been deserving, because she is genius in that show. However, I just love Kemper so much in Kimmy Schmidt, I want her to take home that pointy Emmy trophy so bad. Sure, the whole award thing may be silly, but as long as they are going to hand them out, please give one to Kemper.

Admittedly, the role plays to Kemper’s strengths. Kimmy is usually a warm, bubbly character, and Kemper exudes positivity and light in real life as well as on the screen. It’s hard not to like Kimmy given Kemper’s performance. On top of that, Kemper is asked to deliver so many jokes, often of the ridiculous variety, and she has to sell them. Much of the humor stemming from Kimmy comes from her enthusiasm mixing with her naiveté. Kemper nails that perfectly. She takes great jokes, and elevates them to an even higher level with her delivery.

Of course, this is also a comedy about a woman who was kidnapped as a child and kept in an underground bunker. Kimmy Schmidt has had a messed up life, and it’s not all joy and wonder in her life. Kemper has to delve into serious, dramatic territory on occasion. In this realm, perhaps she isn’t quite on Louis-Dreyfus’ level, but she more than holds her own. Some great comedic actors come across as clunky when it’s time to get serious, but Kemper is perfectly capable. My love for her stems largely from her fantastic comedic performance, but the dramatic moments never feel awkward in her hands.

As Kimmy Schmidt grows as a person, Kemper’s performance seems to only get stronger. It’s one of the funniest performances I can recall, and Kemper is able to extract smiles with the warmth she brings to the role. Louis-Dreyfus is amazing, as always, on Veep right now, but I’m really hoping this is the year the true best comedic performance gets some Emmy love. Ellie Kemper is doing iconic work as Kimmy Schmidt. I’d like to see that rewarded.