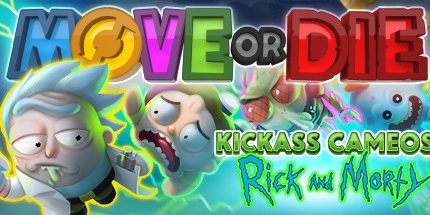 If you’re like 90% of the population waiting not so patiently for the third season of Rick and Morty, Those Awesome Guys and Reverb Triple XP are here to ease the pain. No, you don’t get an early look, but you do get a new character pack for Move or Die, the ultimate 4-player local party game for people who don’t like keeping their friends. With the Rick and Morty character pack, you can play as characters Rick, Morty, Bird Person, Mr. Meeseeks, and Krombopulos the Assassin, so you can get riggity riggity wrecked, son!

Move or Die is one of those wonderfully convenient titles that also serves as an instruction manual for the entire game – you basically have to move and keep moving, or your health bar will quickly sap away. Battle friends, bots, or online players in mini-game modes like Jump Shot, Chainsaw Backstab and Rocket Run, in the expansive and still-growing library. The game modes each have their own unique mechanics and switch up every 20 seconds to keep you on your toes. Practice offline with bots, play with people you don’t care about staying friends with, or go online and piss off random glip-glops. Either way, winning will unlock new skins, Mutator mods, and game modes to add to the constantly growing roster already available. With Steam’s Summer Sale already in full swing, you can save 60% off of Move or Die’s retail price (with a sale price of $5.99), while the Rick and Morty character pack is completely free. Wubba lubba dub dub!